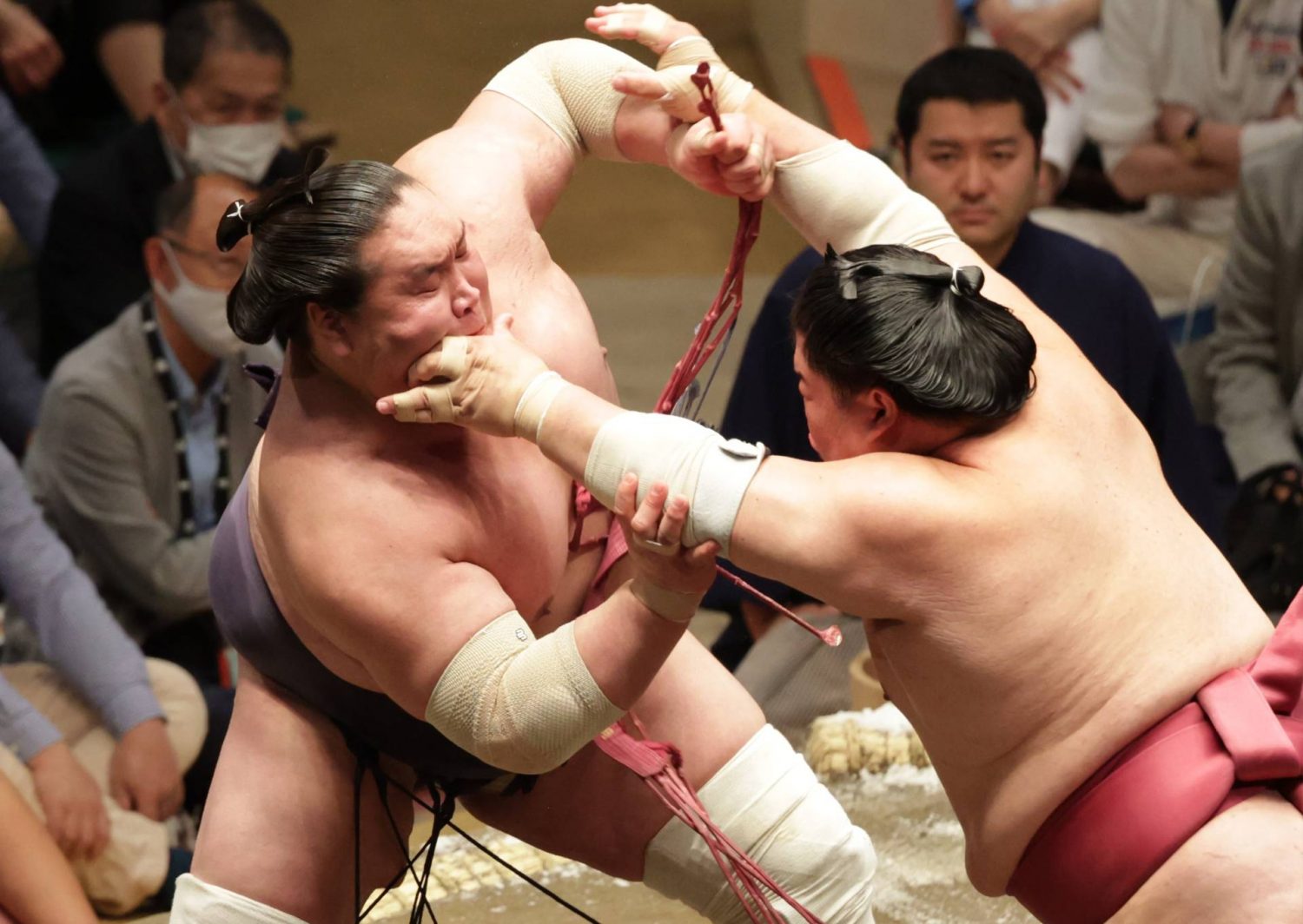 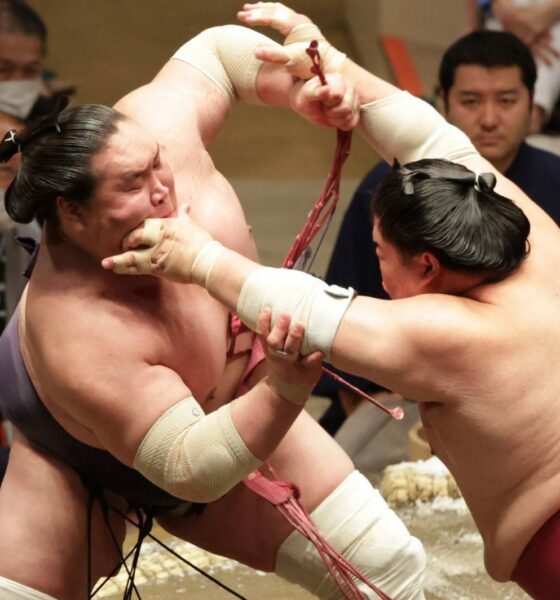 Sumo: Yokozuna Terunofuji among those chasing early leaders after day 4

After day 4 of the summer tournament, Yokozuna Terunofuji is in sight of the leaders after posting a 3-1 record so far. The highest-ranking wrestler in the sport was defeated on the opening day by Daieisho.

There are currently three joint-leaders of the basho, each achieving 4 wins out of 4 so far. Tobizaru, Aoiyama, and Ichiyamamoto have all started their tournaments in impressive fashion and will hope their form carries them to winning records at the very least. Even after such a good start, it’s hard to imagine one of those three winning the championship, but anything can happen in sumo.

There is a large chasing pack on 3-1 which includes many of the pre-tournament favourites. In addition to the above-mentioned Yokozuna, Sekiwake Abi and Komosubi Daieisho are also on 3-1. Joining them are up-and-coming future-star Kotonowaka, Tamawashi, Ura, Wakamotoharu and Kagayaki.

Defending champion Wakatakakage has endured a mixed start to the tournament, with a 2-2 record so far. He is far from out of the running but will need to improve if he wants to win his second tournament in a row. Two of the Ozekis, Takakeisho and Mitakeumi – the January champion – join him on 2-2 as well as Komosubi Hoshoryu and a few others.

Ozeki Shodai continues to show that perhaps he is not the wrestler he was when he won his promotion to such a prestigious rank. He has made a 1-3 start to the tournament and is showing the same form which has seen him go without double-figures victories for a long time. It will only be a matter of time until he loses his rank if he keeps performing in such an unconvincing way. If an Ozeki has two losing records in a row, he will lose his rank. Having posted a losing record in January, Shodai managed to save himself with a winning record in March. Will he need to save himself again in July?

In the second division, fan-favourite Enho continues to enjoy an upturn in form. Having moved up the rankings after achieving a winning record in March, he is currently at 3-1 after some impressive performances against much bigger wrestlers. Ryuden, Chiyomaru and Hiradoumi are leading the way with 4-0 records after 4 days completed.

Join us again for the next tournament update after day 8 and keep an eye on the VMTV Twitter page for the best bouts and finishes during the tournament.

The VMTV Sumo introduction and guide can be found here if you need it.

Combate Global | Gonzalez vs Osuna to headline May 13 card NCAA Wrestling standout Bo Nickal (2-0) dominated Zachary Borrego (3-1) on Dana White’s Contender Series last night, so it was a surprise to many that he was not immediately awarded a contract with the UFC.

Former UFC Middleweight Champion Michael Bisping was commentating on the night and mixed with praise of the 2019 Hodge Trophy winner, awarded to the most outstanding college wrestler of the year, he did suggest he take a slower route to stardom after his 62-second outing.

“Listen, he’s chasing the money, and rightly so” Bisping said regarding Nickel’s transition to MMA from Wrestling. “Bit of caution, though. Just because you can wrestle, just because you’re doing that on the Contender [Series] doesn’t mean you can come in here and beat the best fighters in the world.”

“Listen, he’s chasing the money, and rightly so,”

Bisping followed up by saying “I’ve trained with many a great wrestler, guys almost as accomplished as him, and against the fence, it’s a different world. Of course, the man’s going to have a sensational career. But slow your roll a little bit, buddy.” attempting to temper the expectations of the 2-0 Nickal, who has seen just 1 minute and 35 seconds of professional MMA cage-time.

Nickal will be back on the Contender Series having signed a developmental deal with the UFC and with another win, will almost surely be joining the UFC Middleweight division, becoming one of the hottest prospects in the organisation.

Dana White said after the fight that this is due to Nickal’s lack of experience. Ariel Helwani called it “insulting” that they presented Nickal as if he had a chance of getting a contract when it seems that this was the plan all along.

At 26-years-old, Bo Nickal is approaching his athletic prime, and despite not being signed last night, will more than likely be a UFC fighter in the very near future. 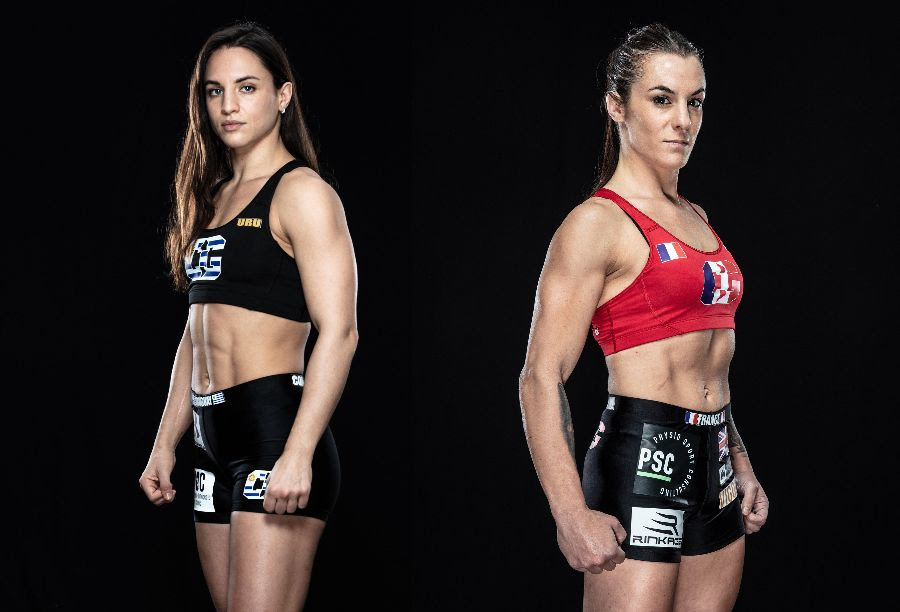 The 33-year-old Claire Lopez of Paris, France via London England will see action for the first time since she debuted impressively with Combate Global, defeating two consecutive opponents in one night last August 13, before finishing as runner-up in the first-ever Combate Global one-night, eight-woman tournament.

Rivarola, also 33 years of age, hails from Montevideo Uruguay and fights out of Stockholm, Sweden.  She will see action in Combate Global for the first time this year since earning a unanimous decision victory over veteran Stephanie Frausto last December 3.

A former undefeated amateur touted for her kickboxing skills, Rivarola has never been knocked out or submitted over the course of her eight-fight professional career thus far.


In the flyweight (125 pounds) co-main event, two unbeaten upstarts in Rosselyn “Chula” Chavira (2-0) and Flor Chavez (1-0) will duke it out in what is also a U.S. versus Mexico showdown. Chavira will make her second start in La Jaula, the Combate Global competition cage, after defeating Tyler Schaefer via split decision in a memorable see-saw battle on December 12, 2021.

Just 21 years of age, Chavez of Mexico City is coming off her professional debut victory, a unanimous decision over American Blanca Marquez on April 8.

Elsewhere on the card and in another flyweight contest, Dee Begley (2-1) of Dublin, Ireland will square off with Yessica Ortega (1-2) of Mexico City. Unbeaten Melissa Gomez (1-0) of Santiago, Chile will face Elizabeth Avila (0-3) of Mexico City at atomweight (105 pounds).

FIREWORKS GUARANTEED, BUT WILL DANA ALLOW IT? DANA-MITE. 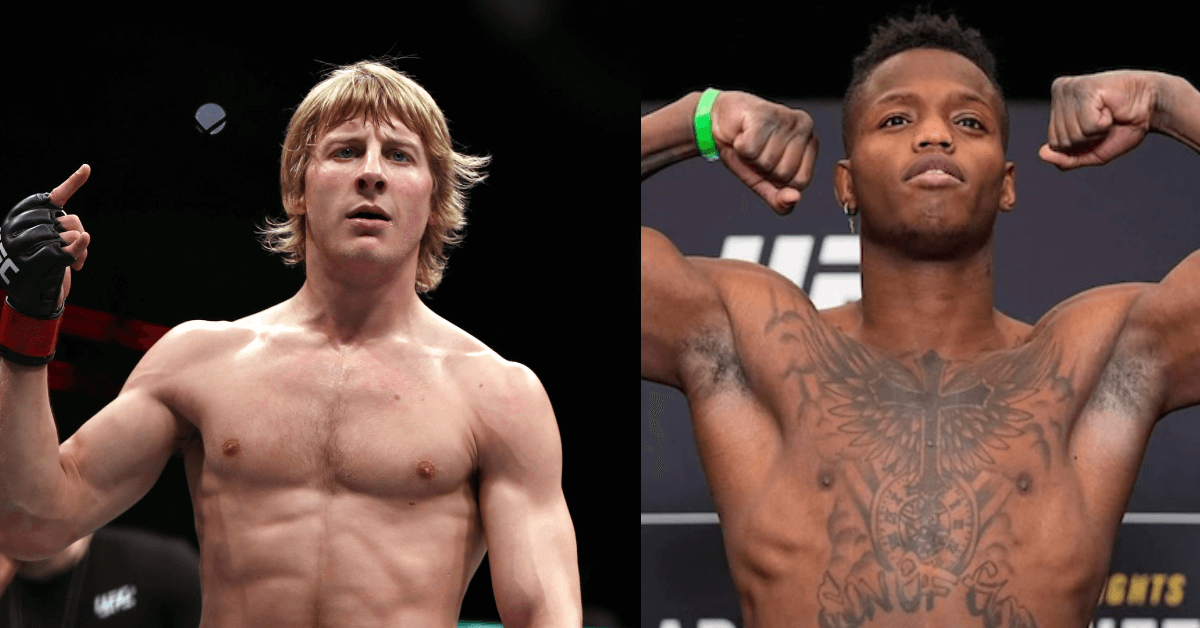 After an emphatic submission win over Erick Gonzalez on Saturday night, one of the UFC’s most exciting young lightweights, Terrance McKinney, is on the hunt for his next opponent. His call out of choice has got fight fans the world over, licking their lips. McKinney wants a shot at fellow rising star, Paddy Pimblett, but will Dana White match-up two of the division’s biggest prospects so early in their UFC careers? The answer, probably not, but we can dream, can’t we?

An observant eye will have noticed that this year, November 5th falls on a Saturday. So, Dana White and the UFC would be foolish not to build an explosive fight night around that. Match-ups that guarantee fireworks, a night to remember, remember. Okay, I’ll stop.

Terrance McKinney vs Paddy Pimblett would provide exactly that. The pair are on a strangely similar trajectory, and would both be coming into this fight off the back of a submission victory via rear naked choke. If they were to meet in the octagon however, it seems unlikely that much of the fight would take place on the ground, in fact, I’m not sure it would have time to.

Recent evidence shows that both McKinney and Pimblett have knockout power and questionable defence. Both are so aggressive on the attack that they leave themselves vulnerable to counter strikes. It’s got them this far though. McKinney’s recent loss to Drew Dober was a round of the year contender, and after going all out to finish Dober after catching him, McKinnney’s gas tank was his main downfall. Paddy on the other hand, is scouse, so he can’t get knocked out. (His words, not mine).

Whichever fighter you favour, it’s hard to envisage this one reaching the end of round one. But with both fighters having the potential to bring huge PPV money into the UFC in the future, Dana will be hesitant to make it happen. We have seen some rising stars thrown into deeper waters lately however, with Khamzat Chimaev beating Gilbert Burns and Sean O’Malley soon to face Petr Yan. The perfect match-up to build a November 5th fight night around is indeed McKinney vs Pimblett, but in all likelihood, it’ll be a match-up we see further down the line. Whatever happens though, the pair of them are just getting started, and seem destined to rocket up the lightweight rankings.