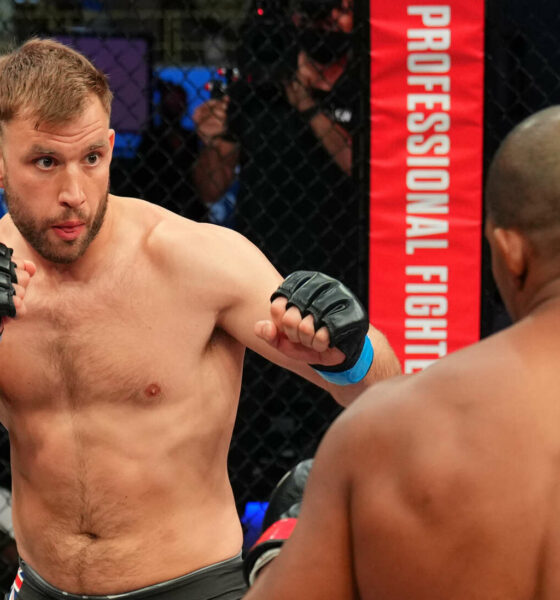 A veteran UK heavyweight with a huge drive to succeed in this unforgiving sport, Stuart Austin looks to make good of his $1 million opportunity with the PFL, beginning this lucrative journey with a shot at the man to beat.

Austin made his PFL debut last season, taking on proven finisher Renan Ferreira, a bout which saw the Brit crash out early after a nasty overhand right connected flush to end the night. Despite the loss, Austin has been given a roster spot for this year’s season, drawing the hardest match up of the bunch. “He-man” will need all of his tools in this one, taking on reigning heavyweight King, Bruno Cappelozza in the main event of PFL 2 on April 28th.

Cappelozza thrusted his name into the mix of guarenteed crowd pleasers last year, seemingly delivering on every outing en-route to championship status and that 1 million dollar prize. It was difficult to gauge what to expect from the Brazilian after 2 years off but boy did he exceed expectations. 3 vicious finishes saw him to a comfortable unanimous decision victory over Ante Delija to end a stellar year as champion.

For Austin this is most definitely the biggest fight of his career, a main event on a big PFL show against the reigning champ, opportunities don’t get much better. He may be the underdog but don’t forget this is heavyweight MMA, and with the experience and ability Austin has he’s more than capable of causing problems in there.

Austin has been around the block when it comes to MMA, competing on the likes of Bellator, BAMMA, EFC and now the PFL. He’s fought Multi discipline veterans such as Satoshi Ishii whom he beat in 2020, UFC staples and veterans alike such as Johnny Walker and Mark Godbeer, even being one of 2 people to hold a win over UFC heavyweight title hopeful Tom Aspinall.

The Aspinall win is certainly one that has aged well, a contest in where he even scored a finish with a heel hook in round 2. The grappling base he utilises so well stems from a judo background, his brother being an Olympic level judoka certainly aiding his game tremendously in the grappling area. A strength in the clinch is always evident with Austin, utilising those judo roots to find throws, paving the way for his strong top game which has seen him control a number of opponents throughout his career.

Aside from his grappling, Austin is decievingly fast for a man with a 6’3, 245lb frame. By no means a volume puncher like his Brazilian counterpart in Cappelozza, he tends to strike in short bursts, biding his time to make reads and capitalise on a sufficient opportunity. He moves well and he strikes fast, the pressure and hands opening up the clinch work which we know is his bread and butter.

He has the experience and he has the skill set, should it all mesh together on the day, don’t sleep on Stuart Austin. He finds him self with a huge opportunity, in a division full of killers, as a pretty sizeable underdog, if that doesn’t breed motivation then I don’t know what will. He-man is out to prove that he is in fact, the master of the heavyweights.

Related Topics:PFLPFL 2Stuart Austin
Up Next