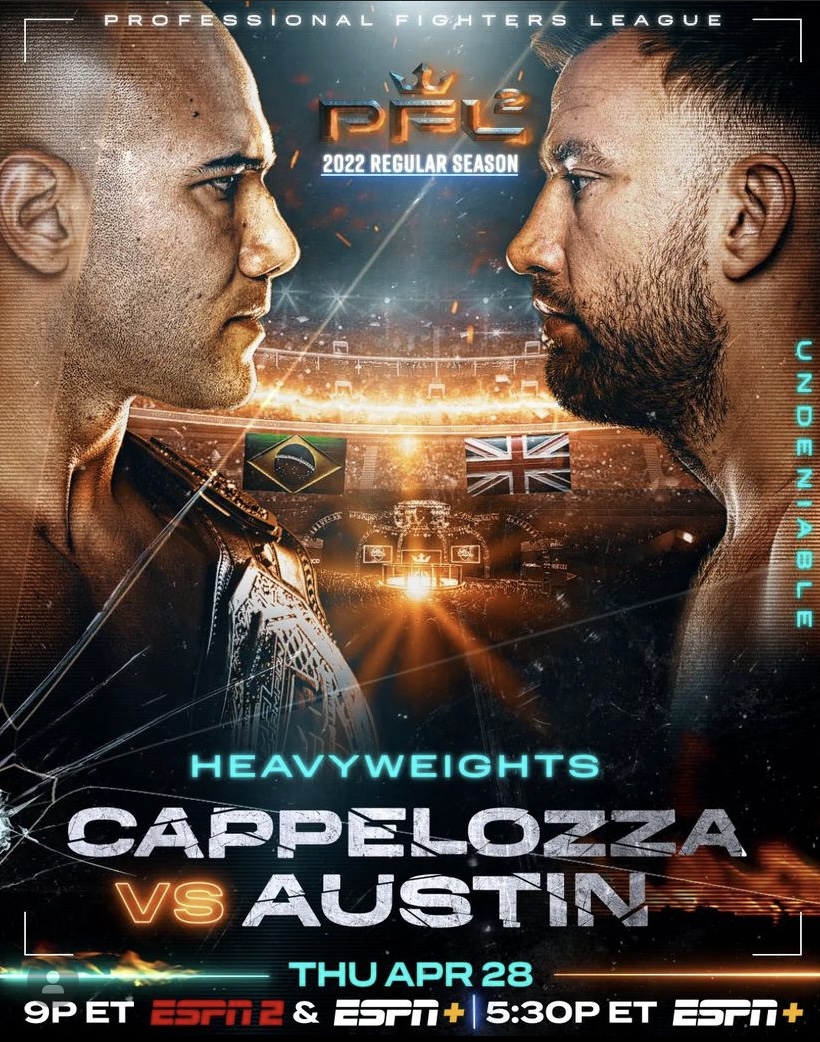 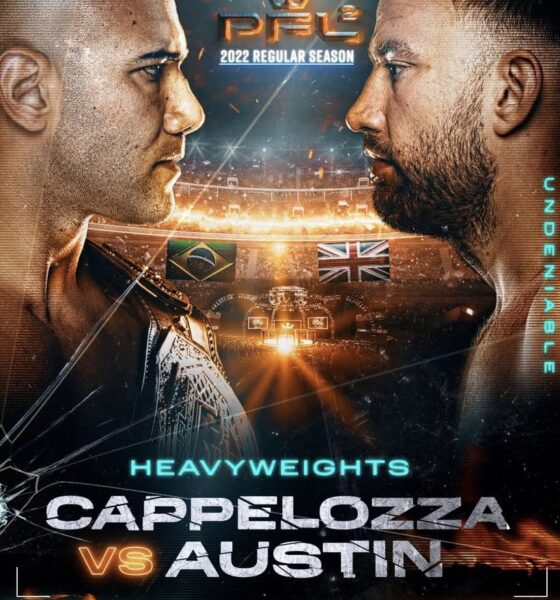 This coming Thursday, the cage doors down in Arlington, Texas, will once again be locked shut for PFL 2, the next card of the 2022 season. A Heavyweight bout between Bruno Cappelozza and Stuart Austin tops the card, with unmissable scraps scattered throughout.

Last Wednesday, PFL kicked off their 2022 season with a staggering opening card, with the main event resulting in a fight of the year contender between Jeremy Stephens and Clay Collard. Also on the blockbuster opener was debuting, Simeon Powell, who scored a beautiful fadeaway knee KO over Clinton Williams.

The quick turnaround sees another electrifying card on paper with more points up for grabs, this time in the Featherweight and Heavyweight Division, with all 10 fighters from both divisions in action. Last seasons Featherweight champion, Movlid Khaybulaev, will not be taking part in this season due to injury, pathing the path for a new Featherweight king to be crowned. Current Heavyweight champion, Bruno Cappelozza, will look to yet again be the beneficiary of $1 million, when he looks to retain his Heavyweight title.

Any fight that includes the name, Kyle Bochniak, should automatically send goosebumps down your spine. The former UFC fighter has a taste for war, and not only that, he has a chin made of granite. One of his most memorable fights was against Zabit Magomedsharipov. Throughout their fight, Bochniak was walking down and stalking the Dagestani native, showing tremendous heart, despite losing the bout. Showing heart and walking down his opponent is a running theme in any of Bochniak’s fights. The fight will be Bochniak’s first under the PFL banner, with the 35-year-old fully prepared to show off his crisp boxing. On the other side stands, Bubba Jenkins. The 34-year-old is looking to go one better than last seasons outing, and this time, be crowned the Featherweight champion. During the 2021 season, Jenkins totted up wins over Lance Palmer and Bobby Moffett, booking his place in the Featherweight tournament. The former NCAA Division 1 Wrestling champion will look to implement his wrestling dominant background, and hope to start the season by picking up some extremely valuable points.

Another Featherweight bout taking place this coming Thursday, is between, Manchester’s own, Brendan Loughnane, and Japanese fighter, Ryoji Kudo. Loughnane picked up 2 wins last season, finishing the season top of the Featherweight table with 9 points after scoring a finish in round 1 and also, a decision victory. The Mancunian unfortunately came up short in the Semi-Final versus the 2021 Featherweight champion, Movlid Khaybulaev. Although Loughnane cannot seek revenge this season with Khaybulaev out, he can seek redemption, and become the new PFL Featherweight champion. First in his path stands Ryoji Kudo. This will be the first PFL fight for the former Shooto and ONE championship fighter, with there being no doubt that Kudo will want to make a dashing first impression and cause the upset in the opening fight of the Featherweight season.

In the featured main event of the evening, and seeing off the blockbuster undercard, is last seasons PFL Heavyweight champion, Bruno Cappelozza, who takes on Stuart Austin. Both men will be looking to score a ‘quick six’ in the opening Heavyweight bout of the season, with Cappelozza hoping to once again, be crowned Heavyweight king, and be presented with a cheque for $1 million. On the opposite side of the cage stands, Stuart Austin, former BAMA Heavyweight champion, who himself, is looking to become $1 million richer. The 33-year-old, fighting out of Titan Gym, in London England, holds a submission victory over top UFC Heavyweight, Tom Aspinall. Austin is looking to mount an upset by beating last seasons Heavyweight Champion, in his first PFL main event, and only his second fight under the PFL lights. He faces a tough test in the Brazilian, Cappelozza, with the 32-year-old having finished 3 of his 4 victories in PFL.

UK and Irish residents can watch the entire main card on Channel 4 from 2:00am, with the prelims available on Channel 4’s YouTube channel.

Who do you see sitting at the top of the Featherweight and Heavyweight table come Friday morning? Let us know in the comments section!