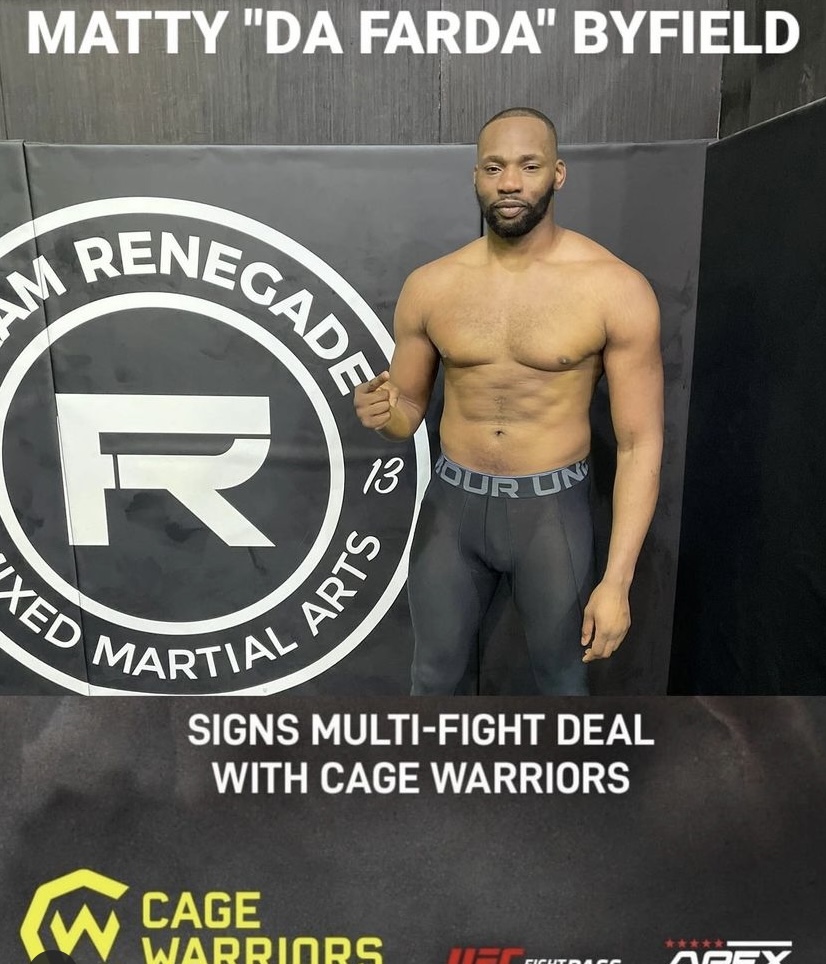 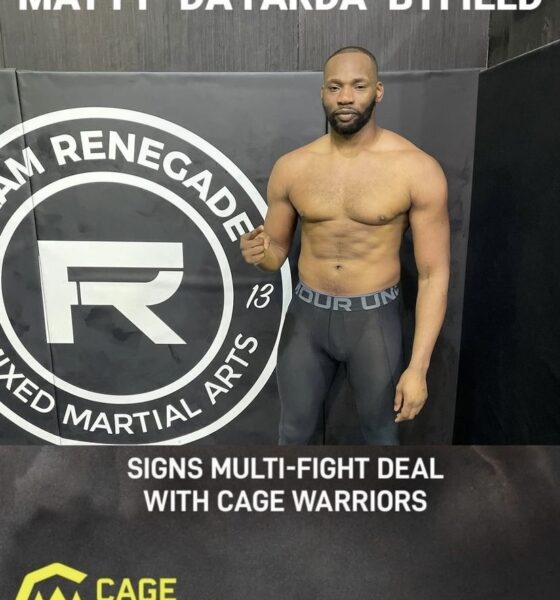 The team Renegade prospect is currently 3-1 as a professional with his last win coming by way of submission in round one against Lewis Tams. During the dominant victory, Byfield showed his high level grappling by getting Tams against the cage and subsequently on the mat. With just 25 seconds left of the first round, he sunk in an arm triangle with Tams not being able to withstand.

“I’m super excited, I feel like I’ve been on the cusp of something great for a while. The fact that Cage Warriors are announcing the return of the Light Heavyweight Division and I’m the first fight in the UK in the Light Heavyweight Division for a while, I feel very privileged at that and I just want to make sure I go out there and show people what I’m about.” Byfield said.

The Brits Cage Warriors deal comes only months after the 29-year-old signed with KNG’s Athlete Management, owned by Leon and Fabian Edwards.

“I’ve known a lot of these guys for years so I don’t really know why I didn’t join them sooner, but I feel like nothing before it’s time, I feel like I had to be around and see the ins and outs of the game and the do’s and the dont’s, and now i’m with these guys and I think i’ll be with them till the end of my career.”

Birmingham’s team Renegade currently finds itself as the UK’s hotspot for MMA, with elite fighters from around the country now deciding to do their camps at the top gym. UFC Featherweight, Arnold Allen, who normally trains at top Canadian gym, Tristar, decided to complete his UFC London camp at Team Rennegade in Birmingham instead.

Along with Arnold Allen, Byfield finds himself surrounded by other elite Martial Artists like Leon and Fabian Edwards daily, saying that it gives him ‘that edge’ in the cage.

“You know the phrase, iron sharpens iron, it helps a lot. I think the biggest thing psychologically it gives you is that edge when you’re in the cage. Most of the time, if not all of the time I’ve been in there, I’m looking at my opponent and I’m thinking, I face stiffer competition every Monday, Wednesday and Saturday morning. It puts you in a good place mentally.” he said.

Teammate of Matty Byfield, ‘The Black Country Banger’ Jai Herbert is scheduled to take on Illia Topuira at UFC London, March 19th, with Byfield confident in his teammate, saying: “Shout out to the team, Jai’s about to go and do work, shout out him on the win, I know he’s going to win.”

Byfield is yet to have an opponent and date confirmed for his Cage Warriors debut, however, he has confirmed there has been talks. “There’s been talks and dates have been thrown. Hopefully it’ll be very soon, there should be a name and a date very soon, I can’t wait to get out there.”

Find Matty Byfield over on Instagram, @mattybyfieldmma, and who would you like to see him face in his Cage Warriors debut?