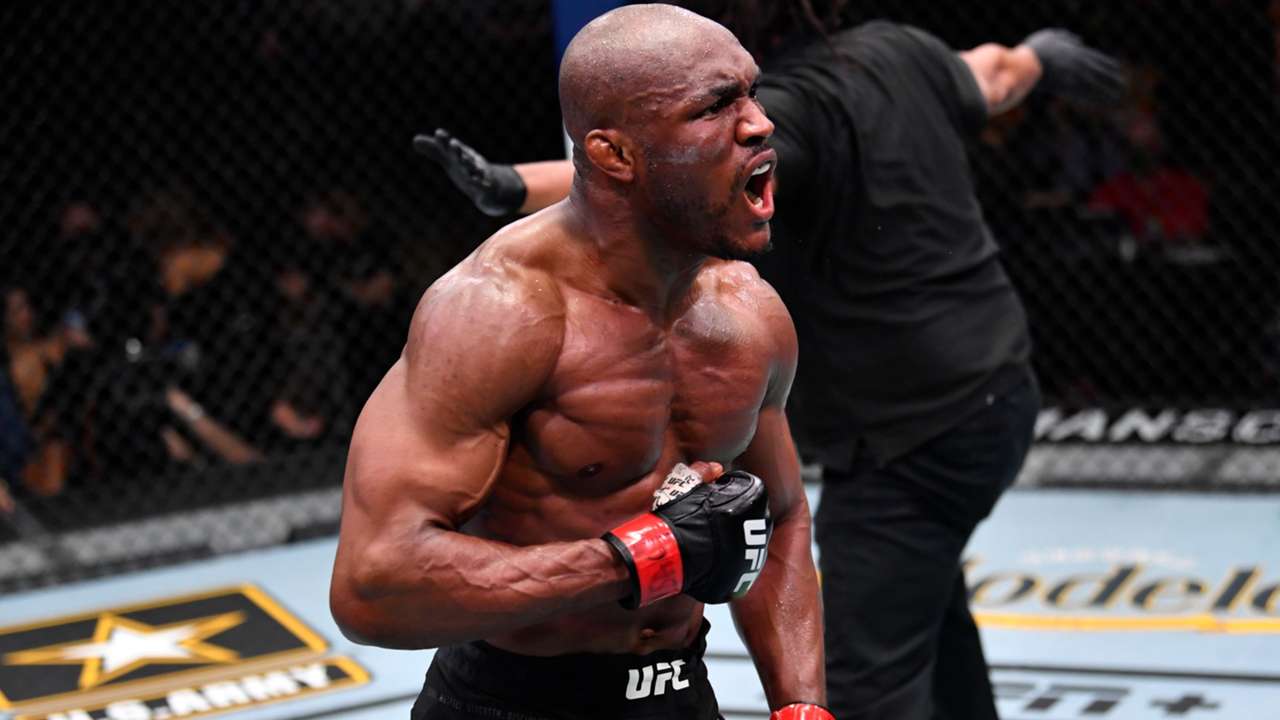 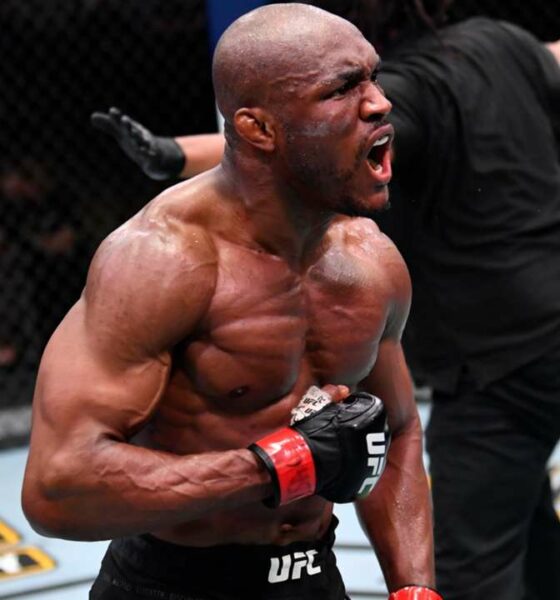 2021 has been a crazy year for MMA. Despite the ongoing pandemic, the world’s top promotions have put on the best fights possible. Today, I’m going to look at the very best moments of 2021. This includes naming my ‘Fight of The Year’ and ‘Fighter of The Year’.

Without any further ado, here are Jake’s Takes for Top Moments of The Year!

Male Fighter of the Year

Establishing himself as the pound-for-pound best in the world, 2021 was the year of Kamaru Usman. With three successful title defenses, including two stoppages, the champion has proven that he is the cream of the crop at 170lbs. Though it won’t be an easy task, we could easily see ‘The Nigerian Nightmare‘ as the top candidate for this category once again in 2022.

Female Fighter of the Year

Regaining the title that you once held and defending it successfully is no easy task. That’s what we saw Rose Namajunas do in 2021, which is why she is the winner of this category. The strawweight queen twice fought Zhang Weili, showing both her skill and grit in both outings. The 115lb division will be coming for her head in 2022, so ‘Thug‘ Rose will have to be on her A game.

Male Prospect of the Year

Picking up three stoppage wins and breaking into the top-15 put Mateusz Gamrot on top of our prospect list. The former KSW double-champion narrowly dropped his UFC debut in 2020, but has gone on to prove he is an absolute nightmare for anyone at 155lbs. Keep your eyes glued to this Polish sensation and expect to see his name in title discussions in the coming years.

Female Prospect of the Year

Since her promotional debut, Scotland’s Casey O’Neill has drawn the eyes of fans. This is because of her exciting style and dangerous skillset, which has brought her three stoppage wins in 2021. Now sat at #15 at flyweight, this 24 year old prospect could very easily be in title contention by next year.

Rising Star of the Year

In only one fight, Liverpool’s Paddy Pimblett has become one of MMA’s biggest stars. The former Cage Warriors champion made a splash at 155lbs, taking out Luigi Vendramini by knockout. The loud-mouthed Scouser has made friends and enemies during his short UFC career, but one thing is for sure: the eyes will be on this bright 26 year old coming into 2022.

Fight of the Year

Words really cannot encapsulate the absolute madness that Gaethje vs Chandler was. This fight is truly one of the rare times that a fight lives up to and surpasses the hype. Dramatic momentum swings and caution thrown to the wind. If you haven’t seen this fight, please do it now. Please.

Knockout of The Year

Blasting his way into title contention with a brutal KO, Jiri Prochazka produced an absolute stunner back in May. In a crazy fight, the Czech native landed a killer spinning-elbow that left Dominick Reyes unconscious. There were plenty of other worthy contenders in this category, but this one is just about as violent as it gets. Truly one of the scarier knockouts we have all seen in recent times.

Submission of the Year

At +3000 odds, Anthony ‘Fluffy‘ Hernandez didn’t seem to have a chance on the ground against the dangerous Rodolfo Vieira. Despite this, Hernandez submitted the former BJJ champion Vieira with a guillotine to shock the world. Though it may not have been the most high-profile bout, this one takes the cake for submission of the year.

Round of the Year

With the featherweight title on the line, Brian Ortega almost became the champion. The only thing stopping him was the grit and determination of Alexander Volkanovski. Despite two extremely tight submissions, the Aussie Volkanovski rallied back at the end of round, reigning heavy shots and leaving Ortega battered. If this doesn’t give you goosebumps, nothing will.

Upset of the Year

As a -1100 favourite, it looked like Amanda Nunes showed up to UFC 269 to slaughter a sacrificial lamb. Unfortunately for Nunes, the so-called lamb turned out to be ‘The Venezeulan Vixen‘, Julianna Pena. In one of the biggest upsets in all of sports, Pena was able to tire Nunes out, land heavy shots and tap her out in the second round. A rematch favours Nunes to avenge her loss, but no one can take this win away from Pena.

Comeback of the Year

Marlon Moraes seemed to be on the fast track to a first-round TKO win at UFC 266. The Brazilian dropped his opponent, Merab Dvalishvili, multiple times and the end looked near. Making it into the second round, Dvalishvili took advantage of the fatigued Moraes to bring the fight with the mat. Referee Keith Peterson mercifully ended the fight after almost 100 unanswered punches from the Georgian, in one of the most shocking moments of 2021.

Feel-Good Moment of the Year

Though many deserving title wins – like Charles Oliveira and Glover Teixeira – could’ve taken this spot, the one that truly warmed our hearts came at UFC 263. The soft-spoken, LEGO-collecting contender Brandon Moreno finally broke through to become a champion. He became the first ever Mexican-born champion in the process, which prompted murals of him to be drawn around the country. The emotion he shares after the win is enough to bring any fan to tears.

Those were Jake’s Takes for the Top Moments of 2021! We hope you all enjoyed. Let us know your picks for these categories in the comments section!

Jake’s Take: Is this the end for Cody Garbrandt?

“Shanks, Creasey, the lot… They’ll be in for a shock when they fight me.” Lewis McGrillen outlines his plans for 2022 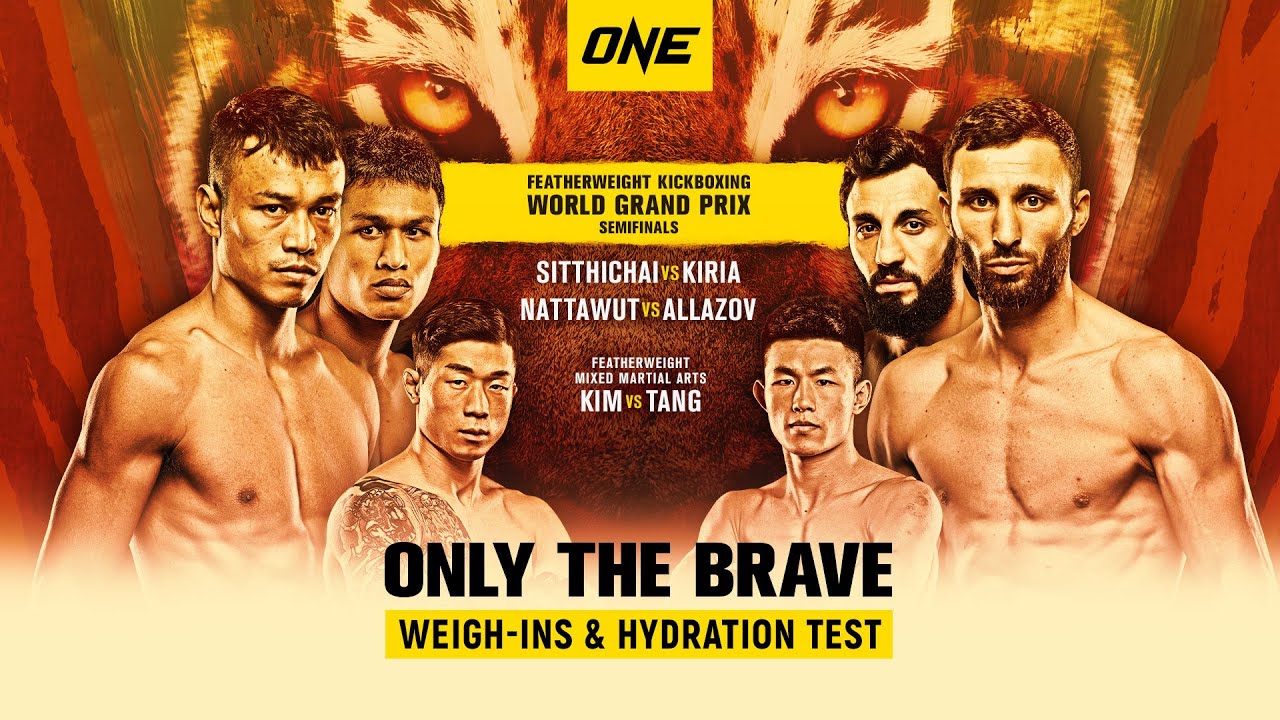 ONE Championship were back today with ONE: Only the Brave, an event which although it was hit by cancellations as always, still saw us able to tuck into an 11 fight card! With the semi finals of the featherweight kickboxing grand prix and some big contests in terms of divisional standings, here are 5 takeaways from ONE: Only the Brave.

Kondratev can upset at featherweight

Kondratev may not be a huge name In a shark tank of featherweight kickboxers, but with a superb finish over the previously undefeated Dovydas Rimkus, he’s certainly shown he has upset potential. Obviously he has bags of kickboxing ability, but what’s most noticeable is that always threatening fight ending power. Even in his ONE debut loss to Pound for pound staple Marat Grigorian, Ivan’s power shone through, putting the Armenian down, a man who’s renowned for being able to take a hit. Although he finds himself in argueably the most stacked kickboxing division of all time, Kondratev has shown he’s never out of the fight, something to keep in mind going forward. He can land, he can hard and he can certainly stir up that division.

UFC veteran Jarred Brooks may have only debuted for ONE in January with a round 2 submission over Lito Adiwang, but with a huge unanimous decision victory over today over #4 ranked strawweight Hiroba Minowa, he looks to be on a direct path to ONE gold.
He may possess a set of underrated a deceptively fast hands, but its no secret Brooks’ bread and butter is his suffocating wrestling base. He’s used this imposing tool to tear through his ONE opposition thus far and looks to face strawweight King Joshua Pacio next time out. If he sticks to his strengths and matches the pace he’s been setting in recent outings, you can’t help but think he’s going to be a nightmare for all the top strawweights and flyweights ONE have to offer.

Opacic is the uncrowded king at heavyweight.

ONE’s heavyweight kickboxing division may not be the deepest division they have, but ONE things for sure, Rade Opacic is the uncrowded king. ONE bring in new heavyweights and Opacic just keeps knocking them down. He continued his impressive streak today with a second round TKO over a game Francesko Xhaja. Since joining ONE, Opacic is 4-0, all 4 being second round stoppages credit to his heavy hands and composed yet very intelligent kickboxing style for a man who’s just 24 years of age. Body work, head shots, leg kicks, you name it Rade sprinkles his whole arsenal into these contests which makes him so unpredictable and dangerous. Yet to be challenged, expect this Serbian to continue adding to an already violent highlight reel as he surges toward that gold strap.

We were initially impressed with the experienced Lipeng after his debut unanimous decision victory over former champ Eduard Folyang last August. Fast forward to earlier today he wasted no time forcing his name into lightweight contention, flatlining a confident Ruslan Emilbek Uulu in just 32 seconds with a vicious two piece. Lipeng is showing it all, he can go the distance imposing a well rounded game and he harbours that killer instinct and power to end the fight in an instant. A very exciting addition to an electric lightweight roster, don’t be surprised if Lipeng causes some damage to those rankings come years end.

Chingiz Allazov is a threat to Superbons throne

Although suffering a tough defeat to Enriko Kehl on his ONE debut, Chingiz Allazov has since shown everyone why he’s one of the best featherweight kickboxers in the world. The vicious beat down of Samy Sana in just 39 seconds was one thing, but today even having suffered a late opponent change, Allazov decemated and outclassed Thai warrior Joe Nattawut. Utilising those fast and slick boxing combinations and implementing the body work he does so well, all Allazov needed was to accompany them with a couple of bludgeoning head kicks and it was wraps for his Thai opponent. Don’t be fooled by his debut, Allazov is very much one of the best kickboxers on earth, once he finds that rhythm he’s seemingly unstoppable, don’t be surprised at all if he takes the grand prix title.

Also on the card, Sitthichai Sitsongpeenong looks untouchable, convincingly taking out Davit Kiria in the second featherweight semi final bout, securing a comfertable unanimous decision victory. The Thai violently picks Kiria apart utilising all of his tools in a masterful fashion. He will take on Chingiz Allazov in the featherweight grand prix final. A Superb victory for both fighters, what a final we have in store.

Full results for ONE: Only the Brave: 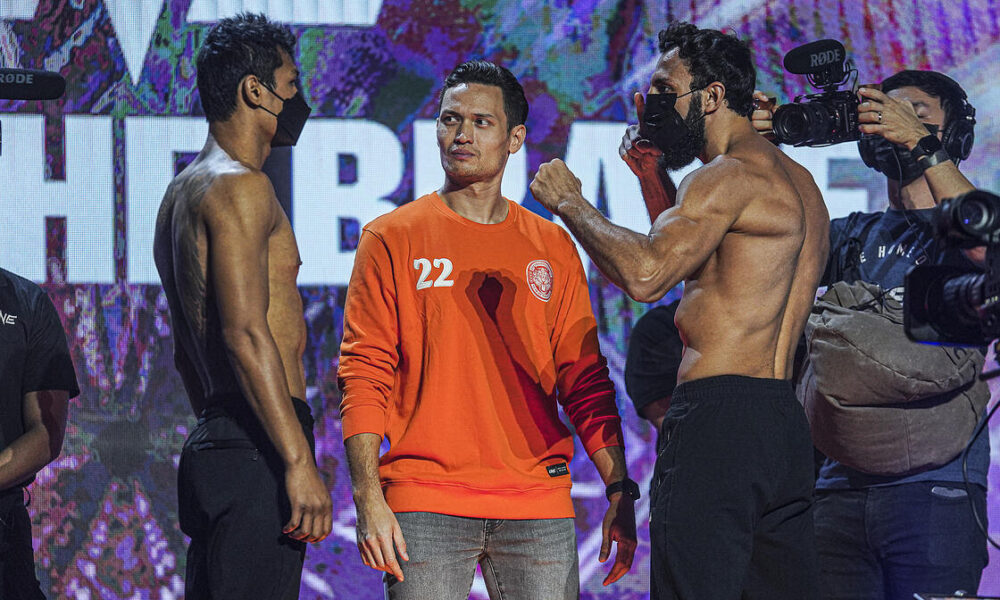 ONE: ONLY THE BRAVE goes down today headlined by a Featherweight Kickboxing grand-prix semi-final between Sitthichai Sitsongpeenong and Davit Kiria. Jarred Brooks and Zhang Lipeng will also feature on the card under MMA rules.

You can see the full final weigh-in and hydration results below.

*Bout originally at featherweight (65.9 KG – 70.3 KG), now at a catchweight of 71.65 KG. Both athletes failed to pass weight and hydration. Bout is no longer a ONE Featherweight Kickboxing World Grand Prix alternate.

**Bout originally at flyweight (56.8 KG – 61.2 KG), now at a catchweight of 61.50 KG. Wang Shuo failed to pass weight and hydration, and will forfeit a percentage of his purse to Tatsumitsu Wada. 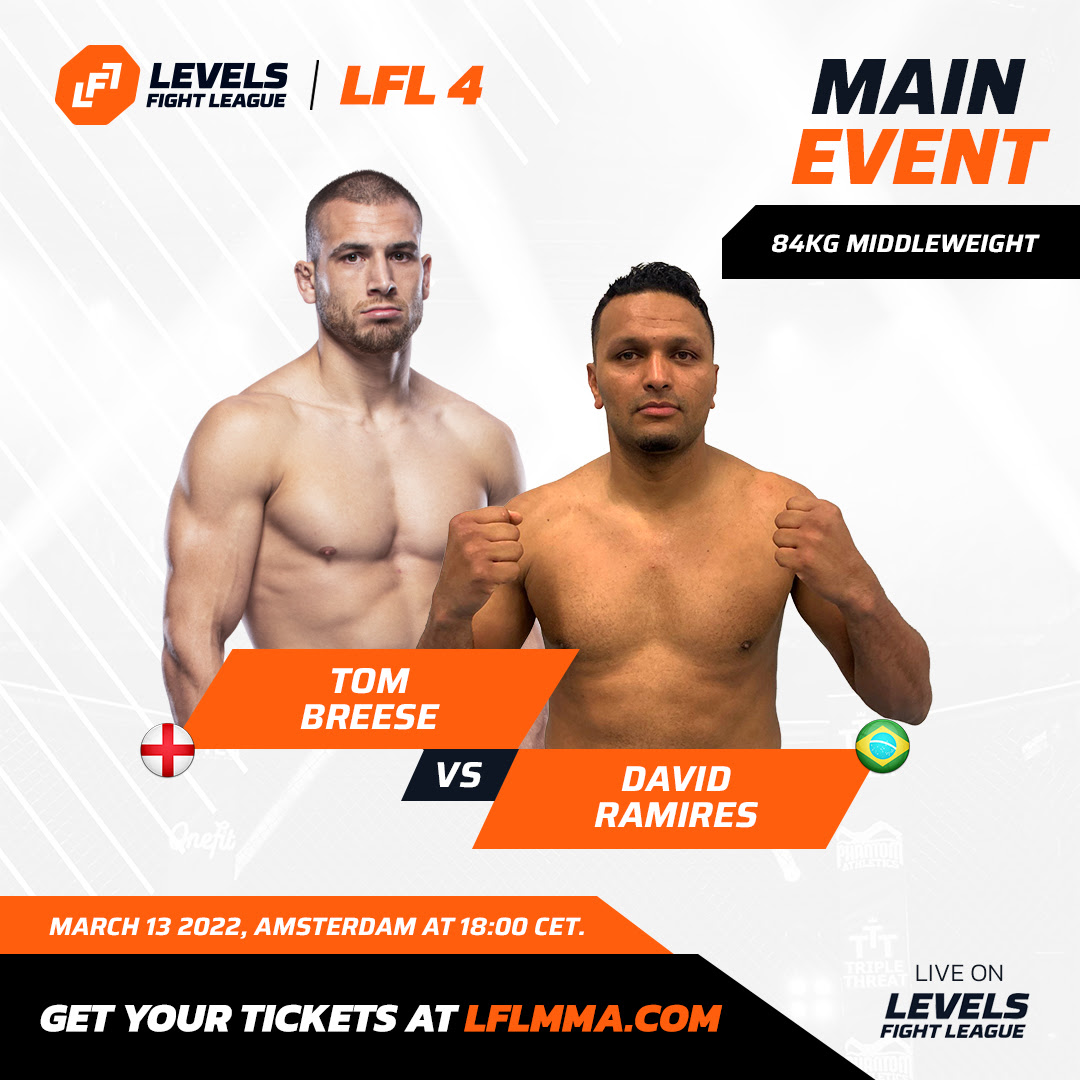 Top UK fighter Tom Breese (12-3) has officially signed a multi-fight deal with Levels Fight League and will make his promotional debut at LFL 4 on March 13.

The fighter and coach out esteemed UK gym Team Renegade, which houses stars such as Leon Edwards, Jai Herbert & Aiden Lee, joins the dutch promotion folliwng his release last year from the UFC.

During his time within the UFC, the 30 year old enjoyed a 5-3 run in the UFC between 2016 and 2021 with notable wins over Dan Kelly, Cathal Pendred, and Keita Nakamura, and earned ‘Performance of the Night’ honours on three occasions.

LFL 4 will be available to watch live around the world on www.LFLMMA.com on March 13!