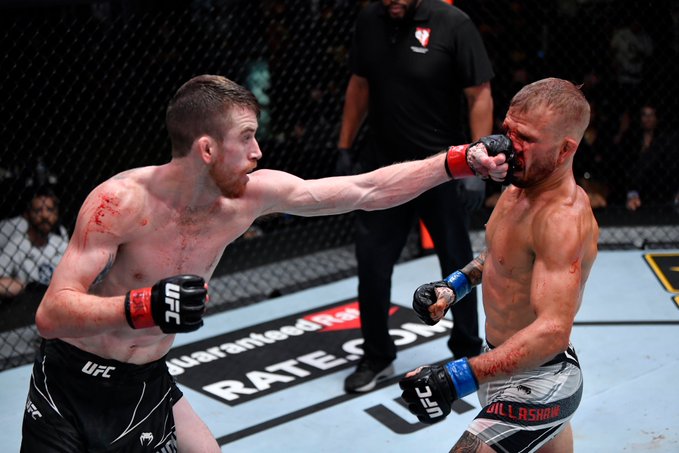 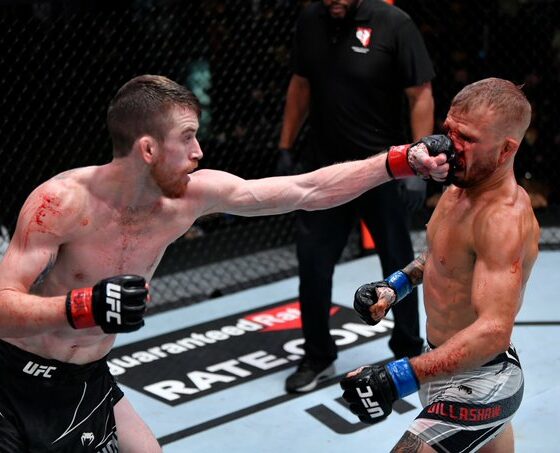 T.J. Dillashaw returned after a 2-year suspension and snatched a hard fought split-decision victory over Cory Sandhagen at UFC Vegas 32.

The MMA community were as divided as ever in the lead up to Dillashaw’s highly-anticipated return. After a years-long hiatus, the old debate of “ring rust vs activity” was fresh on fans minds. Paired with the elephant in the room: How will T.J. fight without EPO?

The 25 minute main event provided fans with answers. Here’s how it played out.

After almost connecting flush with a flying-knee reminiscent of the Frankie Edgar horror knockout, Sandhagen wound up on his back. Undoubtedly, Dillashaw fans had sweaty palms after the opening exchange, but the former two-time bantamweight champion implemented grappling and clinching throughout the remainder of the round. 1-0 Dillashaw.

Realising his success in the grappling exchanges within the first round, Dillashaw opened the second with a double-leg shot, to no avail. From here, Sandhagen took over. Crisp boxing, slick kicks and yet another flying-knee that tested the 35-year-old’s chin. 1-1.

The third round was back and forth. Sandhagen landed shots on the feet, Dillashaw scored takedowns. As the round progressed, Dillashaw began to implement hard leg kicks that seemed to have Sandhagen back peddling. As he marched the sandman down, Dillashaw closed the round strong, with a flurry against the fence that surely swayed the judges. 2-1 Dillashaw.

Round four seen Dillashaw return to the leg kicks, with Sandhagen doing a fantastic job of keeping the fight on the feet and in the middle of the Octagon. Precise, pinpoint striking saw Sandhagen steal the round, with a late spinning back-fist surely leaving Dillashaw seeing stars. 2-2.

We entered the fifth at two rounds apiece. In a night of shambolic judging (to say the least), it was clear that both fighters were reluctant to leave their fate in the hands of the officials. They wanted the finish.

The fifth round largely played out on the feet, and was as close a round as one could possibly get. Dillashaw landed 40 significant strikes to Sandhagen’s 38, with both fighters tallying a 45% striking accuracy. The deciding factor, presumably, was Octagon control and pressure, both of which had to be given to Dillashaw. Even the team here at VMTV are greatly divided. Below shows Verdict MMAs depiction of the fan scorecards, which is always interesting when such a close fight takes place.

As stated in the caption, the fight was one of the closest scored in Verdict’s history.

The result opens up many options in the division, further deepening the bantamweight talent pool. Dillashaw vs Yan/ Sterling? Sandhagen vs Aldo? Who knows where we go from here. Plus, where does Kevin Lee fit into all of this?

How did you score the fight? Let us know below!

Cody Garbrandt on a TJ Dillashaw rematch ‘Let’s run it!’