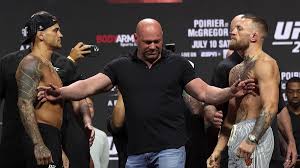 The dust has settled in Las Vegas after an eventful MMA return. UFC 264 saw its’ fair share of finishes and shocking moments, but now, it’s time to see where the fighters go from here. Let’s take a look at the matchups to make!

DISCLAIMER: feel free to disagree, this is purely opinion based!

Claiming the trilogy via TKO through a doctor stoppage, former interim champ Dustin Poirier has a clear fight ahead of him. It is, of course, newly-minted lightweight champion Charles Oliveira. Both the UFC brass, Poirier and Oliveira are all in agreement that this is the fight to make. Poirier has 8-1-1 since 2017, riding two stoppage wins. Will ‘The Diamond’ shine through for undisputed gold? Time will tell…

A tibia and fibula break are the main concern for former champ Conor McGregor right now. According to his team, surgery was successful and a return is planned for late 2021 or 2022. Due to the somewhat controversial nature of the bout’s end, McGregor is petitioning loudly for a fourth bout with Poirier. Personally, I don’t see the need, but I see the appeal on both sides of the argument. I think Tony Ferguson is a fighter in need of a big win, as is McGregor. A clash between these lightweight staples would be entertaining and serve as a ticket to the title discussions for the winner.

To the surprise of many, Brazil’s Gilbert Burns picked up a decisive win over the weekend. Many fans wrote off his title aspirations after losing to champ earlier this year, but a smothering performance over Stephen Thompson proved he still belongs amongst the elite at 170lbs. Burns seemed interested in a bout with Jorge Masvidal, something the BMF champ was on board with. I think this serves as a perfect opportunity for both men to get the win and catapult themselves back into title talks.

Though he came up at short of UFC 264, Stephen ‘Wonderboy Thompson still remains with the elite at welterweight. At 38 years old, many expected a win over Burns to place him against Kamaru Usman to finish the final title run of his career. With a loss, however, it leaves him in a tricky situation. Personally, I think a matchup with Neil Magny presents an interesting stylistic matchup to cap off an amazing career.

Shoeys and all aside, Tai Tuivasa put on a great showcase at UFC 264. His KO of Greg Hardy displayed his power once again, which could be a serious problem at heavyweight. I think his recent run of form is enough to warrant a ranked fight. 3 straight first-rounders is impressive. Unfortunately, heavyweight is slightly logjammed. Throw him in with Tanner Boser and watch all hell break lose.

Is it fair to say that Greg Hardy hasn’t exactly overperformed in the UFC? He has picked up decent wins, but he has no victories of anyone still on the UFC roster. I genuinely think the UFC needs to let him go until he has some more experience under his belt. He’s still very young to this. Let him take some easier fights on the regional circuit, pick him back up in a few years time.

Putting on a dominant display in a one-round affair, Irene Aldana has placed herself back in title contention. To actually get a crack at Amanda Nunes, however, she’s gonna have to pick up a win in the top 5. May I suggest – Germaine de Randamie. This will a delight to watch if it stays on the feet, and just as interesting when it hits the mat.

Though she may have fallen short, Yana Kunitskaya remains one of the most respected at 135lbs. If she’s looking to stay fighting the best, there are plenty of matchups that make sense. I would personally say Macy Chiasson, as both women can mix up striking and grappling effectively. This seems like a fun matchup that could have bigger implications down the line.

Continuing his ascent up the bantamweight ladder, Sean O’Malley mentioned plenty of names in his post-fight interview. The likes Rob Font and Cody Garbrandt are fun matchups on paper, but the timing and rankings tell us otherwise. If O’Malley wants top contenders, I think Dominick Cruz vs Sean O’Malley is a fight that needs to be made. The striking is bound to be insane, and the trash talk will draw in plenty of eyes.

Can we just appreciate Kris Moutinho for a second? Taking the fight on 11 days notice was credible enough, but to show the grit that was on display takes heart. Whether or not you think he belongs in the UFC, give him another fight because he deserves a fair shot. It doesn’t matter who, just one more to see what he’s all about.

How would you matchup UFC 264’s fighters? Do you agree with my choices? Let us know in the comments section below?