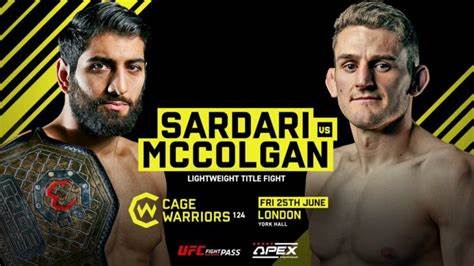 Cage Warriors 124 was stacked top to bottom with exciting talent and some intriguing storylines going forward with finishes galore. Flyweight title hopes were cemented, and debutants made loud statements against tough opposition.

Dominque Wooding kicks starts his CW career with a bang

Dominique “The Black Panther” Wooding has been blessed with knockout power in both hands. The headkick did the talking, and the punches put a full stop on his opening statement with the promotion in 1:09 of the very first round. Words don’t do it justice, have look for yourself:

George Hardwick with a walk off debut

Hardwick had an impressive showing against the former CW Featherweight champ, Dean Trueman. Hardwick looked to impose his will on the always dangerous Trueman early. After a back and forth first round, Hardwick found success with his pressure and conditioning and found the money shot in a rare body shot walk off KO.

His brother Harry Hardwick, is also fighting on the same night and made his debut. He got into trouble early, but showed his full bag of tricks and why has has the nickname “Houdini” as he got the nod from the judges.

Shanks bounces back in a big way

Luke Shanks is coming off losing the Flyweight belt to Jake Hadley who has since left the organization for the DWCS. This vacuum has been filled by an exciting Flyweight tournament that has now ended with Shanks’s win tonight. This fight was hard fought by both men, but Shanks get another go at the title as he is to face Sam ‘urai’ Creasey.

And that was just the prelims….

McCoglan was excellent in this fight, he pressured with his boxing and fought off takedowns as best he could against the crafty champ. McCoglan stayed measured, picking his shots and not offering level changes to his opponent. He locked in a guillotine in Round 3 and will bring Cage Warriors Lightweight gold back to Ireland.

Joe McColgan def. Agy Sardari for the Cage Warriors Lightweight Championship via submission (guillotine) at 0:37 of round 3

Justin Burlinson def. David Bear via TKO (ground-and-pound) at 2:42 of round 2

Nathan Fletcher def. Brian Bouland via submission (rear naked choke) at 4:16 of round 1

George Hardwick def. Dean Trueman via KO (body shot) at 2:31 of round 2

Dominique Wooding def. Cameron Hardy via TKO (high kick and punches) at 1:09 of round 1

Related Topics:cage warriors 124
Up Next