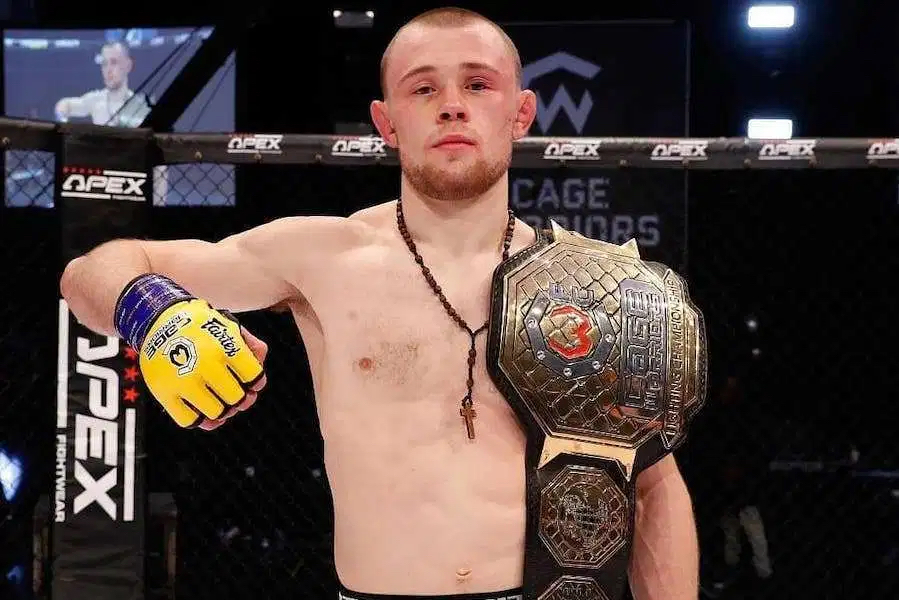 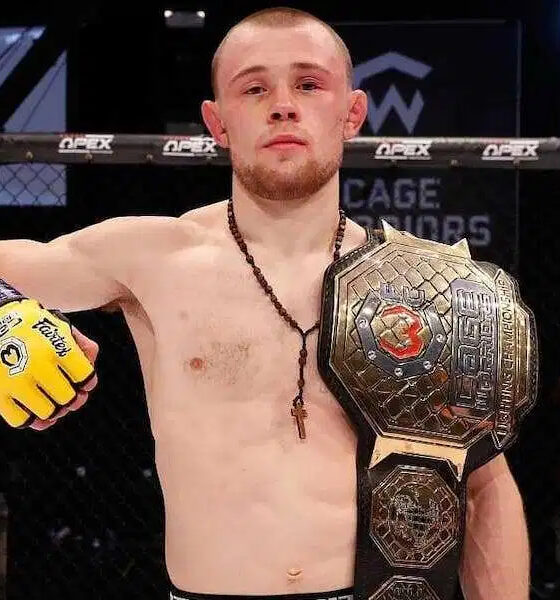 Jake “White Kong” Hadley (7-0-0) sat down with Kyle Dimmond for an exclusive VMTV Vaults episode and put the European MMA Flyweight scene on blast. Hadley has been carving his way through the brush and cutting his teeth in top promotions EFC, Bellator and Cage Warriors. He is raring to run amok on the international stage in the UFC and add another belt to the collection.

Hadley is making his debut on Dana White’s Contender Series on September 21st off the back of his coronation as the Flyweight king over at Cage Warriors. For Hadley, the pressure is nothing new and going forward it is to be expected as he brings his campaign to the Ultimate Fighting Championship. He feels he should go straight to the main stage, and that he is starting off in DWCS to help the brand name grow.

“I’m not bothered about that really (people getting to know him on the DWCS) I’m just bothered about kicking someone’s face in, you know what I mean, and getting closer to my goal of being UFC champion. I don’t care if the public likes me or hates me (…) I just care about violence and hurting someone and getting my dream of being in the UFC, and being world champ.”

The old saying goes that when opportunity knocks, you have to let it in and Hadley let it in and slapped a body triangle on it. Hadley offered to defend his Cage Warriors strap multiple times before the UFC called, but a defense never materialized. Hadley has a theory as to why that is:

“Obviously, Cage Warriors must have said they wanted to build the division and keep beating and I keep beating all the top guys and prospects that they need the time to build (…) I’ve already ruined the division (…) I guess you gotta bring in new guys(…) they don’t want none of me anyway.”

He was already a champion over at EFC before signing on for Cage Warriors, the potential for a champ vs champ fight was there but Hadley had to defeat Flyweights that he thought really were not on his level in a weight class that is often shallow in most organizations.

“To be I honest I thought I should have fought for the Cage Warrior’s title straight away. I had already was a world champion, I was the EFC champion and I beat (Nkazimulo) Zulu who was, at the time, before I beat him he was killing everyone. I beat him and then I beat Blaine O’ Driscoll, who was a world champion, in Bellator. I thought that I deserved the title straight away…”

After grabbing Cage Warriors gold in his fight with Luke Shanks, Hadley deemed that there was no one left on the UK scene to push him at all. He assessed the state of the Flyweight division in the UK and he was none too plussed.

“Like Aaron Aby, for instance, he’d be a severe betting underdog. It’d be like Buster Douglas versus (Mike) Tyson. That is how bad of an underdog he would be (…) (Coner) Hignett or someone else like that? The only fight that would make sense right now would be the (Jack) Cartwright fight and if we were to fight right now I think he’d be the underdog after the last performance he had. There’s nothing left for me there (Europe).”

Hadley talked of his past opponents and the piles of broken dreams that he has left in wake. He deems that it is for the best that he has a shot in the UFC, as the European MMA scene can now lick its wounds and heal after the beating he gave it.

Hadley feels a that the UFC giving him a contract would be the best medicine for the ailing European scene as Hadley has defeated the best it has to offer.

“I don’t want none of you opening your mouths now, because I’ll come down to your gyms and slap ya and rob ya, you get me?”