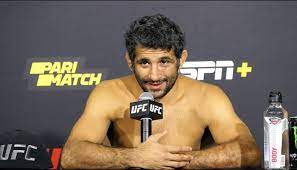 Beneil Dariush: “I think Charles actually owes me a fight”

Hot off his biggest career win to date against Tony Ferguson, Beneil Dariush believes he should be the next challenger for the UFC Lightweight title.

In a recent interview with MMA Fighting, Dariush spoke on why he believes he is next in line for Charles Oliveira and also reveals that UFC matchmaker Sean Shelby contacted him after his win over Ferguson to offer him a fight with the UFC champion.

“I stepped up to fight him on short notice, right after I had fought Scott (Holtzman) when I was supposed to go on vacation. Sean (Shelby) called me a day after my fight and said ‘hey, do you want to fight Charles in five weeks?’ I think, and I said yeah, let’s do it.”

He then supports his claim and recalls when Oliveira pulled out of their scheduled bout back in October at UFC Fight Island. Charles Oliveira would return to fight Tony Ferguson two months later before challenging Michael Chandler for the vacant title at UFC 262.

“I think Charles owes me a fight, too, if you think about it. He said he had family issues. He pulled out of my fight, he called out Tony (Ferguson) while he avoided me, got the fight he wanted and then fought for the belt. I’m not knocking him. He did his thing. He got his title shot. He got the title. Now, just own up to the person you were supposed to fight.”

Dariush is currently sitting at #3 in the official UFC lightweight rankings and riding a 6 fight win streak, there’s no argument he’s worthy of a title shot. However, it seems more likely the winner of the upcoming trilogy fight between Dustin Poirier and Conor McGregor will be next for a shot at Oliveira’s title.

The lightweight division is a shark tank and any fighter in the top five could justify a title shot. However, stylistically Beneil Dariush feels he has the edge over them all, including Oliveira.

Do you feel Dariush deserves a title shot? Let us know your thoughts down below!